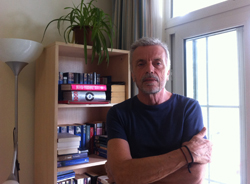 You may have been in academia for four or five years now and considering overseas opportunities to enhance your career or widen your experiences. You may also be thinking of a career move to somewhere steeped in culture and tradition like China – one of the fastest growing destinations for British academics. One person who did was British academic Martin Stannard who made the move in 2005.

Martin is a 61-year old senior British academic who, other than spending one year back in England as a Writing Fellow at Nottingham Trent University, has been in China for all of the last eight years. He works at Beijing Normal University as a Coordinator of Overseas Staff in the School of Foreign Languages. He teaches English & American Literature and American Culture to undergraduates, and supervises final year English Major undergraduate students with their graduation thesis in the areas of literature and culture. Before he left the UK, he attained a Masters degree from University College London.

We asked Martin a few questions to get a flavour of his life in China.

Q: When you initially arrived in China, what were some of the cultural pitfalls you encountered, and how did you overcome them?

A: I didn’t really have any problems, perhaps because there were other foreign teachers here who showed me the ropes, but I found China easy to adapt to. Not everyone does. I had no language, but you soon learn the Chinese for “Hello”, “Thank You”, and “Beer”. I think some people might have problems with the fact that China is SO different from the West in ways that are difficult to explain…but the people are so friendly that any problems evaporate, to be honest.

Q: What were some of the major differences you encountered e.g. work dynamics, the students’ modus operandi, and adjusting to the Chinese mindset etc., etc.? How did you deal with them?

A: The Chinese method is also very much one of learning by rote: students often expect to be able to recite answers learned parrot-fashion – individual research and independent study in the Western style is (literally) largely foreign to them. Over the years I’ve gradually managed to introduce a more Western approach into some of my classes, but doing it wholesale has been out of the question. The Chinese are basically a friendly people: one of their cultural characteristics is that of keeping the other person happy, trying to avoid argument and disagreement. It’s Confucian. If one goes about things in a polite and diplomatic manner things can often be achieved; shouting and getting angry achieves nothing.

Q: As an educator, and a British academic, what were some of the major differences you saw in the student cohorts when you first arrived? How did you adjust to a different way of learning and working in an academic environment?

A: I only have experience of this one university, but I’ve been here long enough and have known enough people, Chinese and foreigners, to know that student life here is tough. There is enormous pressure on students to achieve. For most students, it is exam piled upon exam piled upon exam, and a lot of those exams are in addition to their degree course examinations.

Q: What do you feel (as an academic) is the best/worst thing about living and working in a Chinese university? Would you recommend it to others? Why/why not?

A: Personally I’d say that it’s not so much working in a Chinese university that is a wonderful experience as living and working in China. Experiencing an entirely different culture is a valuable experience. At work, I’ve been lucky in that my university administration is geared to work with foreign teachers and they are very “hands-off.” Having said which, the administration here is intolerant of teachers who complain about things, and teachers who have complained or caused upset have not had contracts renewed.

Despite some language barriers and cultural differences, if you follow Martin’s advice, you too could enjoy a stress-free working life in China. Why not check out some of the academic jobs on jobs.ac.uk?