Results for: 'postdoctoral careers in europe'

Prof. Stijn van der Veen is Professor of Microbiology at Zhejiang University’s School of Medicine and Assistant Dean at the School of Basic Medical Sciences, where he is responsible for foreign affairs and international recruitment. He obtained his PhD at Wageningen University (Netherlands) in 2008 and spent several more years there as postdoctoral researcher and…> 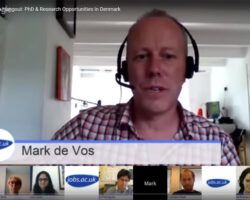 We hosted a live Google+ Hangout on Air with six inspirational panellists with one simple objective: to help you consider opportunities open to you and specifically options for pursuing PhD & Research Opportunities in Denmark.

Dr Petra CameronLecturer in Physical ChemistryFaculty of Science, University of Bath Dr Petra Cameron works at the University of Bath where she is a Lecturer in Physical Chemistry in the Faculty of Science. Petra is an active  scientific researcher and was awarded the Harrison-Meldola memorial prize and medal by the Royal Society of Chemistry in…>

by Sarah Marten Juliane Degner Juliane Degner works at the University of Amsterdam as an Assistant Professor in the Department of Social Psychology. Juliane is a German national, having previously worked in universities in Germany and Belgium before moving to the Netherlands two years ago. The University of Amsterdam is one of the largest universities…>

by Sarah Marten Dr Clive Sabel Dr Clive Sabel spent three years working in the Geography department at the University of Canterbury, Christchurch, New Zealand from 2004-2007. He was initially appointed as a lecturer, but within six months was promoted to senior lecturer at Canterbury, which has an excellent reputation in NZ. Clive recently talked…>